An 18-year-old showed up in a Long Island emergency room, gasping for breath, vomiting and dizzy. When a doctor asked if the teenager had been vaping, he said no.

The patient’s older brother, a police officer, was suspicious. He rummaged through the youth’s room and found hidden vials of marijuana for vaping.

“I don’t know where he purchased it. He doesn’t know,” said Dr. Melodi Pirzada, chief pediatric pulmonologist at NYU Winthrop Hospital in Mineola, N.Y., who treated the young man. “Luckily, he survived.”

Dr. Pirzada is one of the many physicians across the country treating patients — now totaling more than 215 — with mysterious and life-threatening vaping-related illnesses this summer. The outbreak is “becoming an epidemic,” she said. “Something is very wrong.”

Patients, mostly otherwise healthy and in their late teens and 20s, are showing up with severe shortness of breath, often after suffering for several days with vomiting, fever and fatigue. Some have wound up in the intensive care unit or on a ventilator for weeks. Treatment has been complicated by patients’ lack of knowledge — and sometimes outright denial — about the actual substances they might have used or inhaled.

Health investigators are now trying to determine whether a particular toxin or substance has sneaked into the supply of vaping products, whether some people reused cartridges containing contaminants, or whether the risk stems from a broader behavior, like heavy e-cigarette use, vaping marijuana or a combination.

On Friday, the Centers for Disease Control and Prevention issued a warning to teenagers and other consumers, telling them to stop buying bootleg and street cannabis and e-cigarette products, and to stop modifying devices to vape adulterated substances.

The illnesses have focused attention on a trend that has been overshadowed by the intense public concern about soaring teenage use of e-cigarettes, with its potential for hooking a new generation on nicotine: the rise of the vaping device itself. It has introduced a wholesale change in how people consume nicotine or marijuana, by inhaling vaporized ingredients.

Vaping works by heating liquid and turning it into steam to be inhaled. Broadly speaking, e-cigarettes are considered less harmful than traditional cigarettes, which work through the combustion of tobacco that sends thousands of chemicals, many carcinogenic, into the lungs.

But vaping has its own problems: Nicotine or THC, the high-inducing chemical in marijuana, is mixed with solvents that dissolve and deliver the drugs. The solvents, or oils, heat up during aerosolization to become vapor. But some oil droplets may be left over as the liquid cools back down, and inhaling those drops may cause breathing problems and lung inflammation.

“Inhaling oil into your lungs is extremely dangerous behavior that could result in death,” said Thomas Eissenberg, who studies vaping at Virginia Commonwealth University. “That is probably the biggest message we can get out of this.”

Many vaping ingredients are not listed on the products. Vitamin E oil appears to have been a common substance associated with the severe and sudden respiratory problems in some of the New York cases, according to state health officials. It is not known how it was used. Vitamin E is sometimes advertised as a supplement in cannabidiol oil, which is not designed for vaping but has been used that way.

Dr. Scott Gottlieb, the former commissioner of the Food and Drug Administration, said he suspected a link to illicit products — perhaps related to ingredients including THC — because the main manufacturers of e-cigarettes had not suddenly altered their ingredients on a wide scale. “It’s probably something new that has been introduced into the market by an illegal manufacturer, either a new flavor or a new way to emulsify THC that is causing these injuries,” he said.

The outbreaks have created a crisis for two emerging industries — e-cigarettes and legal cannabis — that have pitched themselves as beneficial to public health. E-cigarette supporters consider the technology a safer alternative to smoking, while cannabis has been sold politically as “medical marijuana” and as a substitute for tobacco growers.

Now some subset of these products is causing a serious lung disease that even cigarettes, while lethal in the long run, don’t cause in young people. Lobbyists and company officials in both industries are scrambling to blame unregulated products.

The spate of illnesses has made news again of Juul Labs, maker of the blockbuster e-cigarette device blamed for the surge in teenage vaping. In a television interview, Kevin Burns, the company’s chief executive, said he did not know of evidence linking the recent cases to Juul’s products.

On lung scans, the illnesses look at first like a serious viral orbacterial pneumonia, but tests show no infection. “We’ve run all these tests looking for bacteria, looking for viruses and coming up negative,” said Dr. Dixie Harris, a critical care pulmonologist in Salt Lake City, who has consulted on four such patients and reviewed case files of nine others in the state.

On Aug. 6, Dr. Harris was working in a Salt Lake City-area hospital — she declined to provide more detail in order to protect patient privacy rights — when she was called to the intensive care unit to consult on a patient with the severe lung ailment.

The patient was in his 20s and a heavy e-cigarette user who also vaped THC.

She later consulted with two dozen hospitals around the state on patients with difficult pulmonary or critical care issues. “I saw a second case,” she said. “I’m like, ‘Wait a second, this is weird — two hospitals, two young people, almost identical story.’”

The next morning, she called Dr. Joseph Miner, the chief medical officer for the Utah state health department, who told her he would try to figure out what was going on.

In the ensuing weeks, Dr. Harris saw two other patients firsthand and reviewed nine other cases for the hospital group where she works, Intermountain Healthcare, which has 24 hospitals in Utah and Idaho. She said the first 10 cases were from eight different hospitals; over all, the state of Utah reported 21 cases.

Dr. Harris said that the four patients she had been directly involved with “have been doing e-cigarettes with nicotine constantly, like round the clock. Maybe there’s some sort of accelerant effect causing inflammation in the lung caused by the THC oil.” She added that her interviews with patients suggested they were getting the marijuana liquid from friends in states with legal supplies of the drug, like California and Colorado.

Some patients are suffering from another condition known as lipoid pneumonia, doctors said. When vaped oils get into the lungs, the lungs treat them as a foreign object and mount an immune response, resulting in inflammation and the buildup of liquids, which can cause lipoid pneumonia.

The surge in these illnesses comes at the start of a school year, one in which parents, teachers and administrators had already braced for the challenge of educating in the age of the vape pen, which is easy to conceal.

While educator and parental concern has focused on Juul, the reality is that the market for vaping devices and the liquids that fill them is vast and filled with counterfeiters and do-it-yourselfers, making it hard for regulators and scientists to home in on a specific product.

The Vapor Technology Association, an e-cigarette and vaping industry trade group, asked “public officials to thoroughly investigate the circumstances which might have led to each reported hospitalization before making statements to the public as to whether certain products are implicated in these incidents.”

The regulation and study of the marijuana industry is particularly complex. Even though the federal government still considers cannabis a controlled substance, 33 states now allow it to be sold for either recreational or medicinal purposes or both. Hundreds of cannabis products are sold, legally and illegally, such as THC oil, or cannabis oil with THC.

The Food and Drug Administration has warned some sellers of cannabis product supplements not to make health claims, but more are doing so than the agency can keep up with. The F.D.A. oversees CBD products sold as dietary supplements, but does not regulate THC, which is illegal under federal law. Liquid nicotine and THC, sometimes sold in cartridges for use in vaping devices, can each contain oils that may be safe to swallow but can damage the lung when vaporized into a mix of unknown chemicals.

While e-cigarettes have been presumed less harmful over the long run than cigarettes, the ultimate impact from years of vaping is simply not yet known.

Mr. Eissenberg, director of the Center for the Study of Tobacco Products at Virginia Commonwealth University, said seven cases of similar lung injuries from e-cigarette vaping had been reported in previous years.

“A common ingredient was vegetable glycerin, which is made from vegetable oil,” he said. “If there is some incomplete process, there can be oil left in the vegetable glycerin when that person is using it, and inhaling oil and getting oil into your lungs is what is causing some of the lung injuries we see.”

“Basically what the F.D.A. should be doing is testing every one of these liquids to see if they have any oil at all and making a regulation that would ban oil in any of these products, whether it is a THC product or a nicotine product,” said Mr. Eissenberg, who is researching vaping with a grant from the agency. 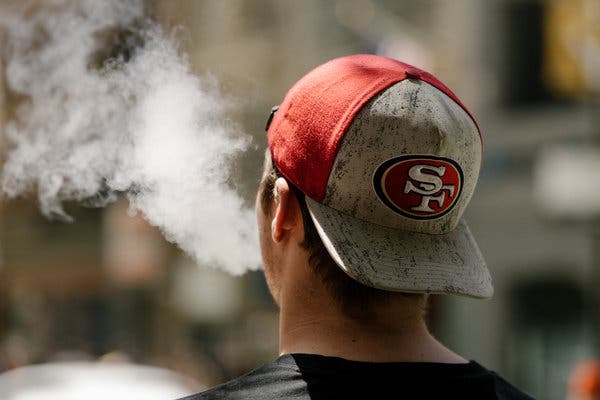 “There is no oversight,” Dr. Volkow said. “No one is actually evaluating the products to see whether they are pure, or if they contain toxic substances. There has to be some way of regulating them.”

The Long Island teenager, who was on a ventilator at one point, has a long road to recovery and doctors still haven’t identified the cause of his illness.

In Illinois, a woman in her 30s who had recently vaped was hospitalized and died, health officials said on Aug. 23.

Another recent case involves a 31-year-old Queens resident namedKevin Corrales, who in late July was in the back seat of a car heading to a Long Island beach when he started gasping for air.

“It was terrifying,” he said. “I was really gasping. I should have been rushed to the hospital. They thought I was exaggerating.”

He called an Uber to take him home. Too tired to climb the stairs of the home he shares with his parents, he stayed in a basement room for several days, until he felt better.

That day, in the car, he had been vaping a Juul, the popular e-cigarette. But he also occasionally vapes THC oil in a separate device. “I can buy these oils like a bag of potato chips,” Mr. Corrales said.

“It’s hard to say whether it was the THC or nicotine,” said Mr. Corrales, who used e-cigarettes to quit smoking.